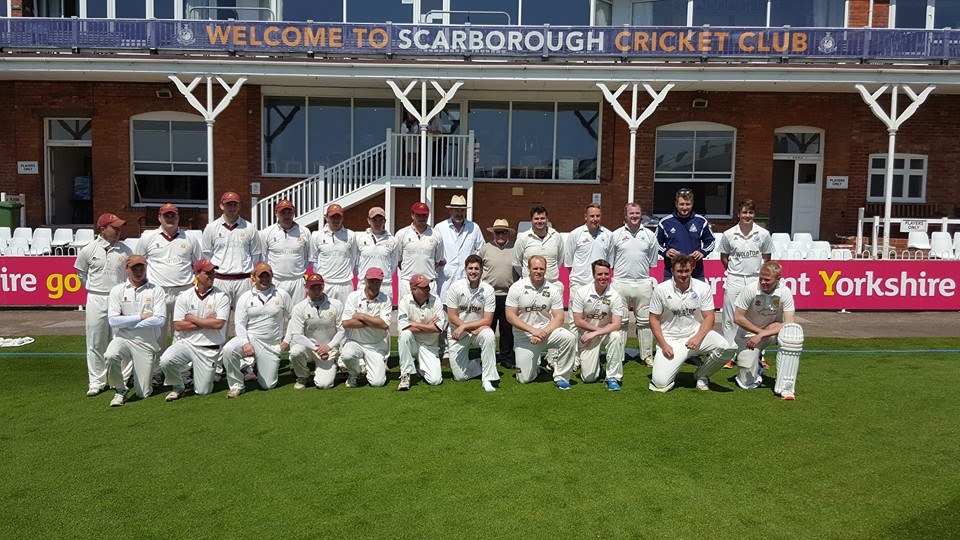 Firstly a big thank you to Scarborough Cricket Club for allowing this friendly in aid of the Rob Stephenson Trust to take place on a glorious Sunny day. An even bigger thank you to Andrew Green aka Greenie and family who’s tireless work enabled the band of minstrels to play our guests. It may have been 20 c in Pickering but the air conditioning unit had certainly been left on in Scarborough and it was jumpers all round. This was KK first outing for their three match tour of North Yorkshire bringing my old rugby playing mate Barrie Hawkin back to his home county. Bereft of alcohol and well rested this was probably the most lively they were going to be.

As usual a shirt front was available for the batsmen a Scarborough standard. With the pride of Lockton, Heslerton, and Scarborough on display it was nice for the rest of the team to catch up on their sleep as the KK attack tore in from the boundary. It wasn’t long before the giant that is Will Witty came into bat having had a busy night reconstituting chicken nuggets the poor lad was not 100% at the party. Added to this he had purchased the largest pair of whites known to mankind it is quite possible these could have been used in the harbour as sails for an ocean bound yacht. Will swished the willow with gusto using every edge wisely as he teased the field. Eventually the mighty oak fell and he could return for a rest.

The scoreboard ticked away nicely with Vasey trying hard to pepper the cars parked on the bank. The crowd waited with baited breath for the appearance of the all rounder Greenie. He did not let his clamoring fans down and was soon back in the pavilion citing bowling was his real talent. The innings closed with 225 on the board. Greenie confirmed his all round credentials by finishing off several plates of the Scarborough ladies finest. Will’s dad Pete had a few appetizer plates before departing for the main course of extra large fish and chips (Julie was away so ‘make on’ as Pete would say).

The sight of Will in full flow coming into bowl would terrify most people but if we add to that his use of variable length, direction and pace it truly was frightening. The KK batsman weathered the storm and pushed the score along. Once again the crowd waited for the arrival of our very own ‘Warney’ after a brief rest and recuperating beer Greenie took to the field and immediately asked the question why was he not at the Euros? Using deft foot work, from a smashed drive to cover he deflected it to give half a chance to Simon Oxendale. Several warm up windmills with his arms and he strode to the wicket for his first over in competitive cricket choosing his short run up. With a whirl of arms and legs the ball was delivered generally in the right direction. After some calming words from the skipper he hit his line and with huge cheers from the crowd claimed two beauties and took the plaudits. Unfortunately this could not stop KK crossing the line for a deserved win.

Once again thank you to all the Scarborough CC the players from both sides our sponsors Frontier, McCains, Russells, Cundalls and all who helped in such a successful event raising £1500.
Most of all a big thank you to Greenie and his family we are humbled by you and your family for organising this.
Patrick, Nicki and Sam