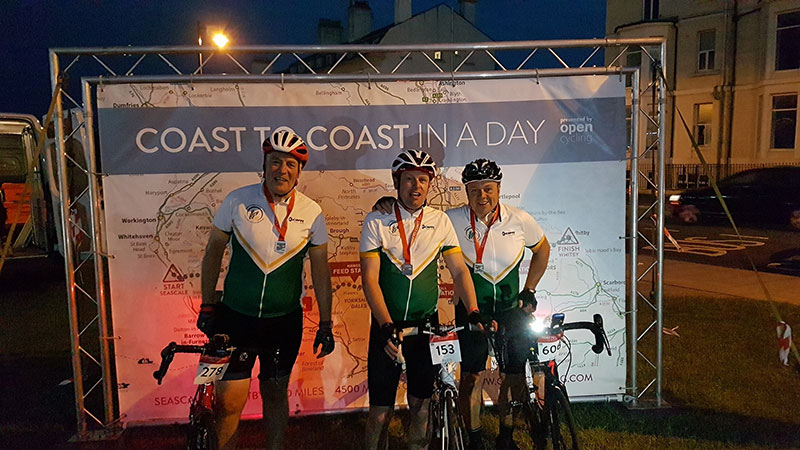 Super heroes – it took 17 and a half hours to ride the 150 miles coast to coast. Across the Lake District, Pennines, Yorkshire Dales and then the North York Moors. A whopping thank you!!!

Peter Brumpton’ our friend that organised this event commented

“Well it all goes back to 2016 when the boys from the Flatlands did the C2C it was the first time for Chris and John and my 2nd ride. Unfortunately, John abandoned at the last feed station and Chris came in the wrong side of midnight. So 2019 was the re-match as a team, training almost every weekend since September 2018. We were ready!

So setting off from Seascale at 5am on the Saturday morning we hit Hardknott and Wrynose pass at a brisk walking pace, but arrived at the Windermere ferry well on schedule. We made good progress out of the Lakes, then hit the Dales and the heat became a problem.

However, we soldiered on and finally hit Whitby 17.5 hours later. Consuming over 20 litres of fluid, during one the hottest days of the year,  we started as a team and finished as a team. We raised over £1200 for the Trust which we were all proud to support”.